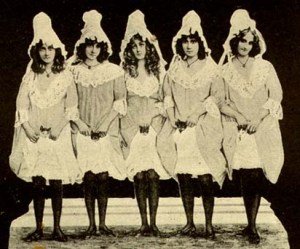 Set in Canada in the first decades of the twentieth century, The Little Shadows revolves around the three teenage Avery sisters, Aurora (16) Clover (15) and Bella (13) making their way around the ‘Polite Vaudeville’ touring circuit across Alberta, Montana, Saskatchewan and Manitoba.

The three girls are accompanied on their travels by their mother Flora, who previous to her marriage to a country schoolmaster had some success in this form of entertainment. As the book opens she has been left penniless and homeless by her husband’s suicide following the death of their young son. Rather than seek help from his estranged brother, Flora draws on her experience and some of her old contacts to start the girls on a career as The Belle-Auroras, a (mostly) sentimental singing act.

The narrative details the constant ebb and flow of their personal and professional fortunes as they are bounced up and down the bill, move between shabby venues and flea bitten lodging houses on what is known to the Vaudeville artistes as ‘the Death trail’ and medium scale theatres and respectable hotels in larger towns and cities. Just when it looks like they have finally shaken off a series of disasters and found their metier as performers, the act is forced to split when Flora is incapacitated by a stroke.

Aurora, who has not long before given birth to a baby boy, takes Flora to find sanctuary with what turns out to be kindly and generous Uncle in the idyllic rural town of Qu’Appelle. Clover sets off for London following the talented and enigmatic mime/acrobat Victor, who has enlisted in the British army to fight in the trenches of the first world war, while Bella starts to build a strong reputation with other acts and as a solo artist. Eventually reunited in Qu’Appelle, they all hit the road again following the lure of the vagabond life of the Vaudevillian.

Endicott’s own experience as a theatre performer and director is very evident in this novel. The sisters are given vocal training by an aging producer Gentry Fox, who teaches them vocal techniques usually associated with the like of Cicely Berry while Aurora learns to draw on Stanislavskian ‘emotion memory’.

Endicott also undertook historical research for this book with funding from the University of Alberta and the support of two research assistants. This gives her descriptions of Vaudeville life, on and off stage, a strong air of ‘authenticity’, although in this context ‘authenticity’ fully deserves the scare quotes. What I actually mean is that based on my own experience of researching late 19 and early 20th Century French Music Hall in my youth, it has the feel of being based on accounts of the period written by performers, producers, venue owners, managers or journalists closely associated with Vaudeville. Just like contemporary celebrity autobiographies and entertainment journalism, these accounts usually have their own agendas. Above all, if they reveal a few of the tricks of the trade and some backstage scandals, or recount the struggles and hardships that pave the road to success, they also have a strong investment in maintaining, at least to some degree, the illusion of the magic and glamour associated with the world of the stage and its denizens.

I do not intend these remarks as criticism of The Little Shadows which is an intelligent novel and often beautifully written. It is in fact the element of romanticism in its representation of Vaudeville which makes it so attractive to someone like me who fell in hopelessly love with the theatre when, at the age of five, I saw a three person touring production of Pinocchio that included the seductive ‘villain’ song ‘Hi Diddle Dee An Actor’s Life for Me’. Further, as often the case in theatre, in The Little Shadows this romanticism is combined with a dry eyed and pragmatic acceptance of some of the harsher realities of life (on and off stage) and there are some dark undercurrents and serious issues beneath the smoke and mirrors.

On the side of illusion, magic and glamour (and the greatest pleasure of this book) are Endicott’s virtuoso descriptions of the acts developed by the Avery sisters but most of all those of the various artistes they encounter and re-encounter on their travels, and who became their friends, lover and enemies. Usually seen through the eyes of one or the other of the sisters these embrace animal acts, dancers, comic double acts (featured as ‘sidewalk conversationalists) monologists and ‘protean raconteurs’, elocutionists, dancers, short melodramas and knockabout physical comedy and/or flying and magic acts. At these points Endicott’s writing is powerfully evocative in its attentiveness to small but speaking details and gestures, to rhythms and shifts of tempo and to the plays of moods and emotions. As a result, she renders the comic patter and accompanying ‘business’ genuinely funny, the acts of physical skill truly amazing and spectacular, the sentimental song or poem really touching. Overall she produces the illusion that you have actually seen these acts, even while she creates a longing to see them ‘in the flesh’.

Staying on the side of romanticism, while highly engaging and entertaining the cast of artistes impresarios and managers are often played a bit too strongly to ‘type’, conforming to clichés of lovable, avuncular eccentrics and scowling violent villains, haughty ‘legitimate’ actresses and saucy soubrettes with ‘hearts of gold’, fast talking, cheeky chappies and dreamy artists.

In some ways the sisters are similarly ‘typed’, with Aurora the eldest being ‘the beauty’, Clover the intelligent and sensitive one and the lively Bella whose energy and comic timing are destined to win her top billing. However, they are actually subtly drawn and sometimes unpredictable: in themselves an intriguing combination of romanticism and dry eyed and pragmatism.

In these terms I was particularly struck by the novel’s treatment of sex and sexual relations. The Avery sisters act play on sentimental images of maidenly charm and innocence, Flora is determined to keep the girls out of ‘burlesque’ (presumably representing ‘Impolite Vaudeville’) and frets over too revealing costumes.  However, they operate in a context where it is implicitly taken for granted by all concerned that female youth and charm are commodities that can be traded for money and success, although this is not openly discussed or acknowledged.  16 year Aurora willingly marries Fitz Mayhew, a producer the same age as her mother, with little illusion on her part as to the nature of the deal and with Flora’s assent, although at least initially Fitz (who may or may not already have a wife elsewhere) appears to believe himself in love with her. A couple of years later, Bella who at 13 has already fended off a sexual assault by a fellow performer, calmly accepts the necessity of sharing ‘the casting couch’ with an even less appealing, predatory older man with a penchant for very young girls. While neither sister is figured as deliberately or actively seeking out, or indeed being thrilled by these liaisons, they respond to them undramatically as opportunities, and as a fact of life in the world they inhabit.

The handling of this issue in The Little Shadows provoked me to reflect on a spate of contemporary scandals in the UK relating to the sexual abuse and exploitation of girls in their early teens and involving ‘show biz’ celebrities(amongst others).

In most cases these activities appear to have had the status of ‘open secrets’; they have been widely known to have occurred or still be occurring by the police and/or other authorities, or by colleagues of the absuser and in some cases to members of the press. Yet either the girls testimony has not been believed, or their exploitation is accepted as ‘how things were/are’ or they are warned that powerful forces will be ranged against them should they complain or they themselves fail to do so because they are dazzled by the power of celebrity or simply that of an older man.

Yet once these stories officially become  ‘news’ the widespread reaction is of shock and condemnation, as if we do not live in a world where 800,000 persons, 4 out of 5 of which are women and up to half of which are under age, are not ‘trafficked’ every year, or on an apparently more trivial level the ‘sexy schoolgirl’ is not an object of fantasy in many cultures.

All of this is part and parcel of highly contradictory and often hypocritical mixed messages concerning teenage girls, sex and sexuality that continue to circulate in our culture and which can be so extremely confusing for the girls themselves at an age when they are discovering their sexuality. These mixed messages are not so very different to those represented by the gap between the ideal of youthful femininity offered by the ‘sentimental’ songs the The Belle Auroras perform on stage and their actual social positioning and treatment as sexual commodities.

This is also one of the few historical novels I have read where teenage pregnancy in less than ideal circumstances is not figured as a terrible ‘disaster’ but again as a simple fact of life and one that ultimately brings much happiness.

It seems that Endicott may also wish to make some serious comment around Victor’s experience in the first world war. If this was the case her point was lost on me because I was still (reeling) under the influence of Pat Barker’s wholly unromantic, savagely uncompromising Toby’s Room which I read just before The Little Shadows.

I seem to have got stuck in a First World War groove since I have since gone on to Jacqueline Winspear’s ‘Maisie Dobbs’ series originally because they were on offer in a remaindered book shop and then because I’ve become hooked. This is detective genre fiction but with something distinctly Pat Barkerish about it. So far Ive read 4 and would describe the third in the series Pardonable Lies as the strongest.While not as original and lacking the razzle dazzle of The Little Shadows and with (mostly) a lighter touch than Barker these books and their central figure Maisie Dobbs are not to be dismissed.