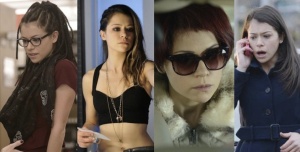 Currently airing on BBC 3, Canadian Sci-Fi series Orphan Black has nothing like the budget or so far the ‘must see/cult/ TV’ status of Broadwalk Empire (of which I’ve only seen series one) let alone Game of Thrones (of which I’ve seen series one to three) but in comparison is a breath of fresh air.

I’d be lying if I did not admit that I find a great deal to enjoy about both these latter series. I love a bit of sword and sorcery and the multiple plots lines of Game of Thrones make it lively and entertaining. It is also packed with interesting and engaging characters delivered through performances from figures such as Peter Dinklage (Tyrion Lannister) and Maisie Williams (Arya Stark) that manage to be by turns. swashbuckling, intelligent and touching.

Beautifully designed and shot and set in Atlantic City USA during prohibition, Broadwalk Empire offers a high degree of visual pleasure in terms of set, costumes and scenography. It also has greater pretentions to  ‘seriousness’ than Game of Thrones (or Orphan Black), even perhaps a claim to socio-historical analysis that extends the parameters of the classic gangster genre. Either way, it slowly builds up a picture of a complex, violent world gradually providing its amoral characters with flesh and depth and again offering excellence, sustained performances from actors of the quality of Steve Buscemi (Nucky Thompson) and Kelly MacDonald (Margaret Schroeder).

Nevertheless, watching both these shows has caused me moments of despair and depression that if I did not teach television drama (or perhaps had something approaching a social life) would have had me switching off.

While both eventually create space for some multi-faceted female characters, these follow the pattern set by other shows such Deadwood and Mad Men. These figures start off by being defined through fairly abject, stereotyped and passive roles, only gradually emerging as agents in the action and usually ‘forced’ to use their sexuality in order to do so.

Meanwhile, ‘scenes of a sexual nature’ in which the female characters are used or abused by male characters abound, as do set-ups that involve hordes of semi-naked prostitutes, who for some reason are given to the sort of inane giggling perfected by Barbara Windsor in the Carry On films..

All of this is justified by the supposed ‘realism’ of the worlds depicted, even though in the case of Game of Thrones this is world is a wholly fantasy one, and although based in some degree of historical fact, Broadwalk Empire remains very much a piece of fiction.

It could be (and no doubt has been) argued that the representations of gender relations in both shows are a comment on casual misogyny but this does not explain the way scenes are shot to enhance the effect of objectification.

For instance, my latest near switch off the television was provoked by the gratuitously high naked breast count in an other wise rather pallid and passionless lesbian sex/ exposition, between Angela and Mary (Aleska Palladina and Lisa Joyce) in Broadwalk Empire.

Even more depressing is the way that the repeated, aggressive heterosexual ‘sexposition’ scenes in Game of Thrones are perceived by some critics and viewers as an ironic joke – just part of the fun. As a result I am only to aware that my objections position me as a humourless and prudish feminist, pointlessly railing against silly TV shows and repeating the same old, same old, boring complaints.

However, most depressing of all is a feeling that however many times these same old, same old feminist complaints are made, actually these dramas do reflect (and re-produce) attitudes to women that are still all too prevalent in the contemporary (real) world.

So it’s lovely to escape to the world of Orphan Black which abounds with strong women characters driving the action, although several of these are in a sense the same, and are all played by Tatiana Maslany.

As the ‘main character’ (orphan, petty thief and con woman, Sarah Manning) Maslany discovers that she appears to be one of at least nine clones scattered about the world who are being murdered one at a time by one of their number. This figure, Helena, appears to be under the influenced of a fanatical religious group, while all the others are all being kept under close surveillance by another equally shadowy and sinister scientific organisation.

Two thirds of the way through the first series, just at the point Game of Thrones and Broadwalk Empire gain narrative momentum, in terms of the plot Orphan Black has started to lose its focus and energy and in many ways is unquestionably a less ‘successful’ drama than these others in its scope and cleverness, if not its ambition.

Nevertheless, Maslany’s performance(s) of the various clones remains a source of considerable delight as she switches between the different accents, gestures, bodily styles and emotional responses of Sarah, the police detective Beth, soccer Mom Alison, science PhD Cosima and the damaged and violent Helena.

I have to say that her English accent as Sarah remains stubbornly stuck on Australian or perhaps Kiwi, especially in comparison to the convincing estuary accent delivered by Maslany’s fellow Canadian Jordan Gavaras, who plays Felix who grew up in the same London foster home as Sarah.

Even so it is lovely to see a such a talented performer playing a slew of female characters who may mess up and be up against it and are not always entirely ‘sympathetic’ but are not passive or defined purely through their sexuality or by their relationships to male figures.

I also realise how far even in the 21st century this sort of role is still more likely to occur in science fiction than in other genres and have been much struck by the video clip of Joss Whedon (creator of Buffy the Vampire Slayer) that has recently gone ‘viral’.

Whedon makes a witty speech replaying some of the answers he gives to the question he is asked again and again (and again and again) by journalists concerning what attracts him to write ‘strong women characters’. Finally he shouts: ‘Why aren’t you asking the 100 other guys why they don’t write strong female characters?’

This is admirable but I wish he’d added why don’t they ask why more strong female writers are not employed on films and television? And while they are about it some more writers from other so called ‘minority groups’?

Then maybe I could relax and stop complaining.