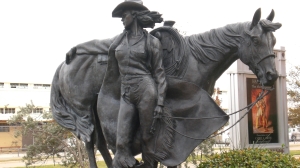 This year’s ASTR conference in Dallas took me to the National Museum of Cowgirls in the cultural district of Fort Worth as part of the ‘tasting Dallas’ seminar group (see previous post https://dramaqueensreview.com/2013/10/13/professor-shannon-rose-riley-and-elaine-in-conversation-about-good-night-out-girls-cowgirls-strippers/). Locating the cowgirl ‘taste’ of Dallas was no easy matter: I googled walking directions from my downtown hotel which came up as eleven hours and thirty one minutes. This was me forgetting that the USA is a driving not a walking country; the city of Dallas is no exception. It took two trains (one of these was an Express train complete with Casey Jones styled ‘toot-toots’ which delighted me no end – I know I’m showing my age here, but for younger readers this was a 50’s children’s television series about western railroads – check out the theme tune and you’ll hear what I mean about the ‘toots’! http://www.youtube.com/watch?v=ig3GcDBjQN4) and a cab ride. The cab driver seemed less than impressed by my museum choice, pointing out other options such as the Museum of Science and History or the Modern Art Museum, all of which are in the immediate vicinity.

Accompanying me on the cowgirl trail was theatre scholar Susan Bennett from the University of Calgary – a wonderful companion with knowledge about the West and expertise in theatre and museums (http://www.amazon.co.uk/Theatre-Museums-Professor-Susan-Bennett/dp/0230580203). Enter the museum and you’re standing inside a dome-shaped building that Susan generously described as a postmodern rotunda; I was privately thinking more phallic-styled shopping mall. But there we were, ready to get a ‘purchase’ on women from the West. 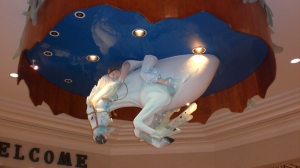 The ground floor exhibition area was something of a disappointment. It offered a collection, ‘The Shirtweavers’, by a new nominee to the Museum’s Hall of Fame, Cathy A. Smith. Smith has learned the traditional skills of the Native American women quiltworkers and put that craft to use by making costumes of Native American chieftains. On the one hand, these were beautiful outfits exemplifying the women quilter’s craft but, on the other, these were mainly all for male chieftains – only one relatively minor display at the back of the hall was devoted to Native American women.

More encouraging as we moved to the upper floor was the opportunity to view a short movie: The Spirit of the Cowgirl. This film introduced the cowgirl pioneers by paying primary attentions to their hard labour, their relations to the land, animals, family and community. ‘Believing you can do it’ is, we are told, the mantra of the cowgirl. In its montage of cowgirl clips, attentions are also paid to class and race. For instance, the film opens with images of Clara Brown, a black slave from Virginia freed in 1859 at the age of 59 who went on to build her own business in the West, laundering for a mining community http://www.cowgirl.net/HallofFameHonorees/Brown,Clara.html . There were also arresting images of elderly women pioneers whose lined faces ‘spoke’ of a life outdoors and the land they laboured (photographer Barbara Van Cleve, celebrated for her images of women rangers, is also honoured in the Museum’s Hall of Fame http://www.barbaravancleve.com/). However, why oh why I asked myself, did they choose a male narrator for this film?!

Many of the museum’s exhibits tended to focus on the representation of the cowgirl in television, film or popular literature. This made it harder, I found, to fathom details of real cowgirl lives. On the other hand, there were lots of pleasures to be had in following the representational cowgirl trail from dime novels of the 40s through to the dare-devil visuals of Hollywood’s real cowgirl stunt doubles. Susan and I also spent some time with the carousel of costumes, looking at the different kinds of cowgirl outfits (the more sequins the better in my view).

If there was one overarching disappointment about this museum visit it was the absence of women visitors, or actually any visitors at all. Watching The Spirit of the Cowgirl, Susan and I had the small movie theatre to ourselves and that was also the case when we sat down in a second space to watch a collage of cowgirl film clips (this cinematic experience accompanied by talking-horse-head that took me totally by surprise!). Was there a women’s event culture or networking happening around the museum, was a question I put to the woman on reception at the end of the visit. She explained that in earlier years when the museum was formerly sited in Hereford, Texas and operating on a much smaller scale, there had been more of a sense of an extended women’s community. Seemingly, this had largely (although not totally) dissipated with the move to Fort Worth and its grander location in the museum district.

Nonetheless, determined on the experiential pleasure factor of being in the National Museum of Cowgirls, I made the most of the interactive opportunities. And yes, I rode the Museum’s simulated Bronco ride and have since returned to Lancaster sporting a pair of cowgirl boots – the spirit of the West comes to the England’s North West!

You all have a good day now,