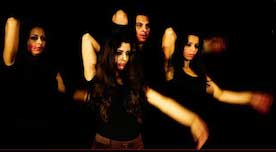 I’ve recently returned from a trip to Morocco where I attended the annual, June conference organised by Professor Khalid Amine, President of the Tangier-based International Centre for Performance Studies (ICPS). It’s the second time I’ve been able to attend this conference; on both occasions I experienced this as a culturally valuable opportunity to listen and learn about theatre from the Arab world. This year was rather a special year, marking the tenth anniversary of these international gatherings. The selected theme was ‘Alternative Dramaturgies of the New Millennium’ which opened up some fascinating debates on what kinds of ‘new’ dramaturgies are circulating in contemporary Arabic theatre, in parallel with dramaturgies considered in different international, theatre contexts (participants came from a range of countries, including Tunisia, Algeria, Egypt, France, Germany, UK and USA).

In tandem with the academic sessions, there was a vibrant festival of Moroccan theatre hosted in what was formerly the Kasbah Palace, now a museum. As a palace not a theatre, this historic site is adapted for and transformed by the festival of contemporary performances; the crossroads of Tangier’s African-European past provides the backdrop to the performed social, political, cultural and religious complexities of Moroccan life in the here and now. As a cultural outsider I have scant knowledge of the Moroccan situation, but what claimed my attention was the women-centred focus which surfaced in the three main (professional) shows I saw.

From Jaouad Essounani ‘s activist company Dabateatr based in Rabat came Hadda, a solo show which uses the personal memories and recollections of Hadda, a woman who comes from an extremely poor economic background, to open up a larger canvas of political, social and religious questions. When the piece begins, Hadda appears ‘saintly’, covered from head to toe in white cloth, but sheds this outer layer as she takes the audience back through her life to reveal stories of violence, rape and prostitution. Equally, from an expressionistic imaging of female martyrdom (multiple back and white, filmic images of the actress playing Hadda accompany the live performer), the show makes use of quirky animations as a backdrop to illustrate the more profane episodes in her life. For a flavour of the show check out this clip posted in connection with a review in the French paper Telquel:

I’ve seen some of Essounani ‘s work before – Hadda and Hassan Lekliches! at Edinburgh’s Traverse Theatre as part of David Greig’s ‘One Day in Spring’ season in 212 – and I’m fairly certain (although might be mistaken) that this latest piece is further incarnation of this show. In any event, this did provide me with some form of contextualisation, unlike my viewing of Schizophrenia by Aphrodite. Knowing nothing about this company and with a very wordy text in Arabic, I would have been entirely at sea were it not for the fact that visual signs of ‘women and madness’ translate easily across cultural and linguistic boundaries. That in itself, however, becomes problematic in a different way: presented with relentless images of damaged femininity without a sense of any kind of release makes, from a feminist point of view, for a rather painful viewing experience. This feeling was exacerbated by the design: a clinical, walled-in setting which reinforced the idea of no escape. On the other hand, the doubling of the schizophrenic female narrator with an actress whose ‘text’ was movement-based, composed, screened and projected live to create the illusion of repetitious ghosting, and at one point breaking through into the space to reach for her on-stage, other self, did provide arresting, beautifully composed moments – here at least a sense of female solidarity. I say doubling, but there was actually a ‘tripling’ involved: a puppet version of the doubled women also accompanied the performers (though the puppetry, or rather puppet master, arguably needed a little more skill to make this work!).

But the real highlight of the festival was the truly wonderful and inspiring performance of Larmes au Khol by le théȃtre Anfass. A relatively new company, they have already won the ‘grand prix’ at the National Festival in Meknes (2013) for this show. And deservedly so! This was a highly accomplished ensemble piece by three women and one man. Between the women (plural) and man (singular) the entire fabric of the show was gendered, formally and thematically, and elicited an overriding sense of the women’s desire to burst out of their social and sexual constraints. ‘No Exit’ (a nod to Sartre, perhaps) was scrawled large across the set. But unlike Schizophrenia, the socially fuelled energies of frustration felt productively charged – demanded change. Pina Bausch, someone suggested to me on leaving the theatre, an apt point of reference for describing an aesthetic built around repeated refrains (physical and verbal) of this kind of gendered energy. The compositional build of the piece was punctuated by two clearly marked climatic moments of social complaint – the first a cry of men are the problem; the second, it is money that’s the root of discontent. Not knowing Arabic and only semi-following the French surtitles because the ensemble work was so captivating to watch, the intricate ins and outs of the women’s personal and social situation eluded my grasp, though there were easily decodable signs of the complaints and pleasures relating to women’s sexual, maternal and professional (work) lives. Ultimately, the levels or layers of understanding were of little import; the overall dramaturgical impact of this show was such that its experiential power moved me to feel the gendered constraints, pulsating and bursting with alternative desires, both personal and political.

I don’t know how far Larmes au Khol has been able to travel, but it is thoroughly deserving of an international tour. Edinburgh anybody? And as an example of ‘new’ dramaturgies, this suggests that something very exciting is happening on the Moroccan theatre (and, perhaps, social) scene.