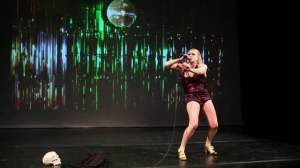 Curated by the Live Art Development Agency (LADA), ‘Old Dears’ took place over the 27th and 28th of November at the Chelsea Theatre, Worlds End, London and was billed as being dedicated to the ‘radical influential and fiercely feminist practices of an older generation of artists’. The impressive programme featuring women ranging from around 45 -65 (and rising), included performances by Liz Aggiss, Penny Arcade, Marcia Farquhar and Rocio Boliver who performed alongside group of artists who had been participating in a week long workshop with her (whose names I am unable to record because in a CRAFT* moment I omitted to bring a pen).

It also featured a panel discussion between three of the most influential creative producers (of any gender) in the field of performance and live art in the UK over the last thirty odd years; Lois Keidan, Judith Knight and Nikki Millican, and five similarly important artists; Liz Aggiss, Anne Bean, Claire MacDonald, Geraldine Pilgrim and Lois Weaver.

Three times in the course of this event it was mentioned that complaints had been made about the title ‘Old Dears’, a decision for which Keidan (Director of LADA and herself several years passed her 21st birthday) steadfastly refused to apologise, because she stressed, ‘It’s a joke’.

I mention this because an unapologetic attitude and an understanding of how (in context) humour can speak in a fashion that is at once (sometimes literally) deathly serious and life-affirmingly funny, might be identified as one of the threads running through ‘Old Dears’.

Rather than a blog, which (I have often been reminded) is supposed to be short, I could write a book trying to do justice to these performances and trying to untangle these threads. Because then this is going to be a lengthy piece (how about we think of it as durational?) on Elaine’s always wise advice, I have decided to post it in two parts.

In this first part I’m going to consider in some detail, Liz Agiss’s performance The English Channel which opened the programme. In Part 2, which I will post next week, I will refer back to this show as a springboard to consider aspects of the other elements of the programme; before finally returning to the joke.

And she does -but it’s what I want too. In fact this is exactly the performance I would love to make at this point in my life, if that is, I had lived it as a live artist, dance performer and choreographer, with training in modernist expressionist dance and in ‘eccentric dance’ derived from Music Hall, a film maker, singer  and (still) had long blonde hair to wallop about like a heavy metal rock star, and the courage to wear sequins (lots of sequins). As it is I am extraordinarily pleased to have been in the audience.

Like all the best work The English Channel is very simple and extremely complex, with images arising and returning, overlaying and displacing each other, like waves running to the shore. This is evident from the start when Aggiss emerges slowly from the gloom, covered head to toe in a black garment with a drawstring top, that could be a shroud or the sort of cape historically worn at masked balls and at the Venice Carnival, or possibly a chador, or one of those individual tent/towel affairs that close around the neck and in my childhood were worn by the shy to change into their swimming things on the beach. Yet when she pulls this garment to above her knees, due to the awkward yet precise movements of her bare legs beneath it, combined with her seemingly elongated neck, it becomes something like the body of a great, black bird. She stops to ask in a harsh whisper ‘Is there anybody there? Is there anybody there?’ and when no answer comes says ‘I’ll wait’ and we hear a whistle. Eventually, she releases the drawstrings to reveal the apparent elongation of her neck is caused by the fact that she is wearing a skull on top of her own head, her hair covered by something that is part 1930s swimming hat, part the sort of (skull?) cap worn in 16th and 17th century paintings of old men and women.

While there are direct references in the show to the English channel, the question ‘is there anybody there?’ points to another sort of ‘channelling’, embracing the channelling of Aggiss own past but also the work of various other ‘wilful’ performance practitioners who have passed.

The sequence described above apparently draws (amongst other things) on the few remaining images of obscure ‘grotesque’ dancer Isi Te Je, and ever afterwards, magically producing props and costume changes from beneath her black cape, or out of her knickers or up from beneath her top, Aggiss invokes and manifests the spirits of other persons, performances, times and places. To mention but a few; this includes the first woman English Channel swimmer, Gertrude Ederle (1905-2003), choreographer Jurt Joos and his 1927 piece ‘Dance of Death’, Robin Hood and his Merry Men from 1950s children’s radio (another  sort of ‘channel’), amateur soprano Florence Foster Jenkins (1986-1944) who we see on film insouciantly wobbling through Mozart’s ‘Queen of the Night’ aria, 1920s Berlin artist Clare Waldoff, and from the Music Hall Kay Lynne and her 1944 innuendo laden, ‘fingers dance number’, ‘saucy’ comic Max Miller and the eccentric Max Wall. There are also clips on the intro to TV’s Ready Steady Go! of the 1960s and a recording of Pat Simmonds who was the voice of UK’s ‘speaking clock’ between 1963-1985, edited to say (something like) ‘at the first stroke- dizziness, at the second -numbness, at the third stroke’….

The show orchestrates music, sound effects, projected images and film around a ‘base-line’ of ‘eccentric’ or ‘grotesque’ dance in a series of distinct, sequences or episodes. Yet the impression I take away is of a continuously unfolding parade of figures and performance idioms, that seamlessly slips between the comic and the chilling, memento mori and raucous celebration of the pleasures of the flesh. In the course of this the connotations of the generously applied make-up Aggiss wears flicker from death mask to clown, to stage ‘glamour’ to ghost, and back again.

Now, Aggiss is a jaunty Robin Hood in green cape and hat prancing around to children singing, and now a deer shot by an arrow. Now, in a plain black swim suit and white cap against a period film of women swimmers, she sinuously flexes her arms in way that ‘channels’ Ederle but also gestures towards the ballet Swan Lake.

Now, in an emerald green, figure hugging, sequined and fringed dress, she dances the twist and the mash potato and sings of dancing all night and being too drunk, or tired or too weary to fuck. Now, back in the black cape and white cap with a long knives /feathers worn on the fingers of one hand, she is simultaneously a bird and hunter, rocking back and forward with moves that could have come straight from the Rite of Spring. Now, rummaging in her knickers she finds first a nail (‘another nail in my coffin’- ‘bleeding is so last year’) and then a boiled sweet which she offers to the audience.

Now, she is Max Wall but in a gold sequined number more likely to be worn by Tina Turner, and is strutting and prancing in front of a film of the ‘fingers dance’ and getting us all joining in the chorus of the song.

Now, dressed in a 1940s-style red cross nurses costumes and blue skull cap she sings Purcell’s exquisite ‘Dido’s Lament’, first seriously but on the final beautiful, mournful ‘Remember me’ with a deliberate Foster Jenkins wobble. Slowly, she fills brown paper bags first with her props and finally with her own breath before pushing them away, with a final shooing gesture as if setting them free.

Now, in a short black dress that is torn and embellished with safety pins, she is a punk rock amazon, hair flying and arms vigorously punching the air and belting out a list of the sort of admonishments given to unruly children (‘sit still, be quiet, don’t touch, elbows of the table, have you calmed down yet?’) to music of the Dead Kennedy’s.

The latter section, taking us back to childhood and so in a sense the ‘start’, appears to be the piece’s finale and ends with Aggiss saying Bye Bye but as we applaud she stops us saying ‘it’s not over until I say so’ getting us all to come on stage to dance to ‘Knees up Mother Brown’.

Meticulously constructed and perfectly polished but playing entirely by its own rules The English Channel is imbued with a sort of crazy, magnificent wildness. In fact its ‘carnival’ as defined by Mikhail Bahktin which ‘brings together, unifies, weds, and combines the sacred with the profane, the lofty with the low, the great with the insignificant, the wise with the stupid’. Like his notion of ‘grotesque realism’, this show can be said to ‘precisely to present a contradictory and double-faced fullness of life’ that embraces ‘negation and destruction […] inseparable from affirmation’, just as the laughter in this show, like his description of ‘folk laughter’ might be said to symbolise “the defeat […]of all that oppresses and restricts” (92)

* CRAFT is an acronym frequently used by menopausal women. It stands for ‘Can’t Remember a F***ing Thing’. 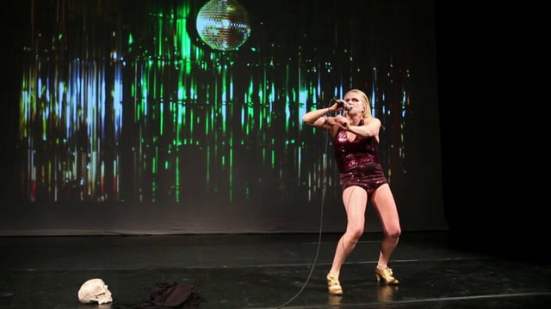